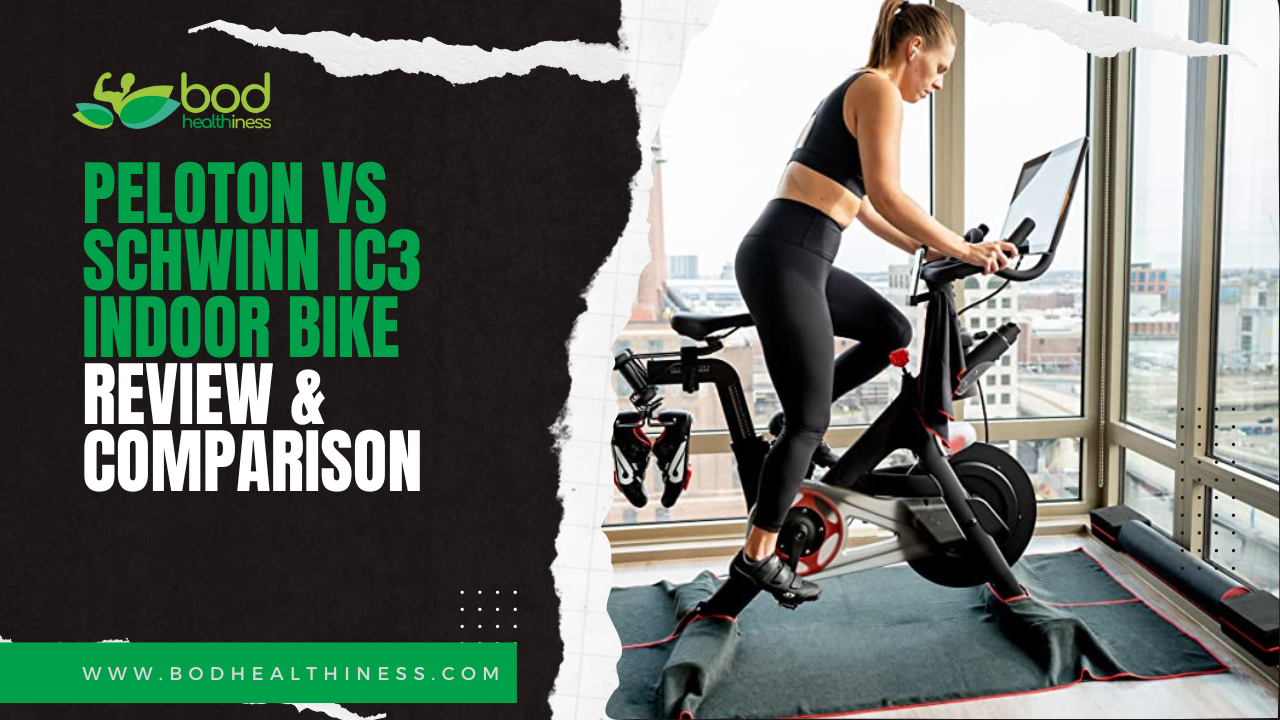 Owning a Peloton bike in 2022 is all the rage among the cycling community. People say, “It’s the best spin bike, and nothing else can compare!” But how accurate is that statement? In this article, we’ll do a side by side comparison of the Peloton vs Schwinn IC3 to find out if you need to spend $2000 on an Indoor Bike.

Look, There are many competitors to the Peloton bike that will cost you a fraction of the price you’ll pay like the echelon smart connect bike. But the harsh reality is that most times the other brands don’t stack up. However, Schwinn is one of the few brands that made a high-quality bike that is a surprisingly close alternative for the Peloton cycle.

As one of the largest fitness equipment producers today, Schwinn, has been well-known for having affordable products. Of the bikes that they produce the Schwinn IC3 Indoor Cycling bike is the most similar to a Peloton bike. As such we’ll be using that bike as the benchmark for this Peloton vs Schwinn comparison.

In this comparison, we’ve decided to focus on the key features so you can learn about all the similarities and differences of each bike. With that covered, you’ll be able to purchase the right bike for your budget.

Our first point of focus is on the design of the Peloton and Schwinn IC3. Both bikes feature a similar structural layout that is typical of a great indoor cycle. However, Peloton’s design is a little more visually appealing with smooth contours and a sleeker finish.

While slightly more visually appealing and having a 22″ HD touchscreen display, there is not much of a difference in the structural designs of both bikes.

Both bikes feature Height adjustable handlebars with a multi-grip design.

They also both come with a sporty cycling seat that can be adjusted vertically and horizontally.

One key difference here is that the Schwinn has handlebars that also allow horizontal adjustment and has more gripping positions than the Peloton bike. This feature of the Schwinn is a great perk that we’ve found advantageous when doing lengthy workout session.

The strongest advantage that the Peloton bike has over the Schwinn IC3 is in its display. On the Peloton, you get a 22″ HD display that is flawlessly compatible with the Peloton app. The downside, however, is that this comes at a high cost which we’ll go through later. On the Schwinn bike, you get an averagely sized LCD console that is cable of tracking primary workout metrics such as time, calories, etc. While the LCD falls behind with the Schwinn indoor cycle, you do get a media tray that you can place your device. This feature is an excellent part of the Schwinn IC3 as it allows you to save a tonne of money by just adding the Peloton App on your smart device or tablet.

The footprint of a stationary bike is probably one of the most critical aspects, and both bikes deliver in this area. The Schwinn IC3 has a dimension of 48.7” x 21.2” x 49.8” while the Peloton bike has a dimension of 59″ L x 53″ H x 23″ W. In terms of weight, Schwinn IC3 weighs a total of 101 lbs while the Peloton Cycle weighs 135 lbs. This difference in weight between the Peloton and Schwinn is not an issue as the Schwinn bike is a little smaller. The Schwinn bike also doesn’t have the extra large display which adds to the total weight of the Peloton.

One more difference between Schwinn vs Peloton is that one bike has a higher weight capacity than the other. The Peloton comes with a user weight limit of 305 lbs while the Schwinn IC3 has a weight capacity of 300 pounds.

Both the Peloton and Schwinn IC3 bikes feature a belt driven flywheel located at the front of the bikes. They both are pretty silent, but in terms of fluidity without resistance, the Schwinn bike is the winner. With the Peloton, there is no flywheel weight listed anywhere, but it seems to be around 30lbs. In contrast, the Schwinn bike features a 40 lbs flywheel and should generally provide a smoother ride.

The most significant difference between Peloton and Schwinn is the price. While the Peloton Indoor Cycle does offer to finance the bike, the cost you’ll end up paying is absurd in comparison to the Schwinn IC3. The Schwinn indoor cycle comes in at about a quarter of Peloton’s price.

Click here to check the Price of the Schwinn IC3.

Additionally, you get a solid warranty if you opt to go with the Schwinn bike. The warranty covers up to 10 years on the frame, three years for mechanical parts, one year on Electronics and 90 days for labor. This warranty is impressive for a product that costs so little in comparison to the Peloton’s warranty. Peloton offers a warranty of 5 years on the frame and 12 months on labor and other parts.

If you consider the Peloton or Schwinn as just an exercise bike, then the clear winner is the Schwinn bike for its low costs. However, we can’t take away the fact that Peloton’s Digital app is a great platform that boosts the value of the bike. Sadly, while their app is terrific, it still doesn’t come as a part of the Peloton bike, plus if you decide to get the Peloton, you’ll still be paying a monthly subscription for the app. With that being the case you will be better off choosing the Schwinn Indoor bike and using the Peloton Digital App for workout content.

If you still aren’t sure about Schwinn bikes then check out our post on some other great Peloton alternatives. We’ve also included a cool Peloton hack that you can use to get Peloton App working on any screen or device.