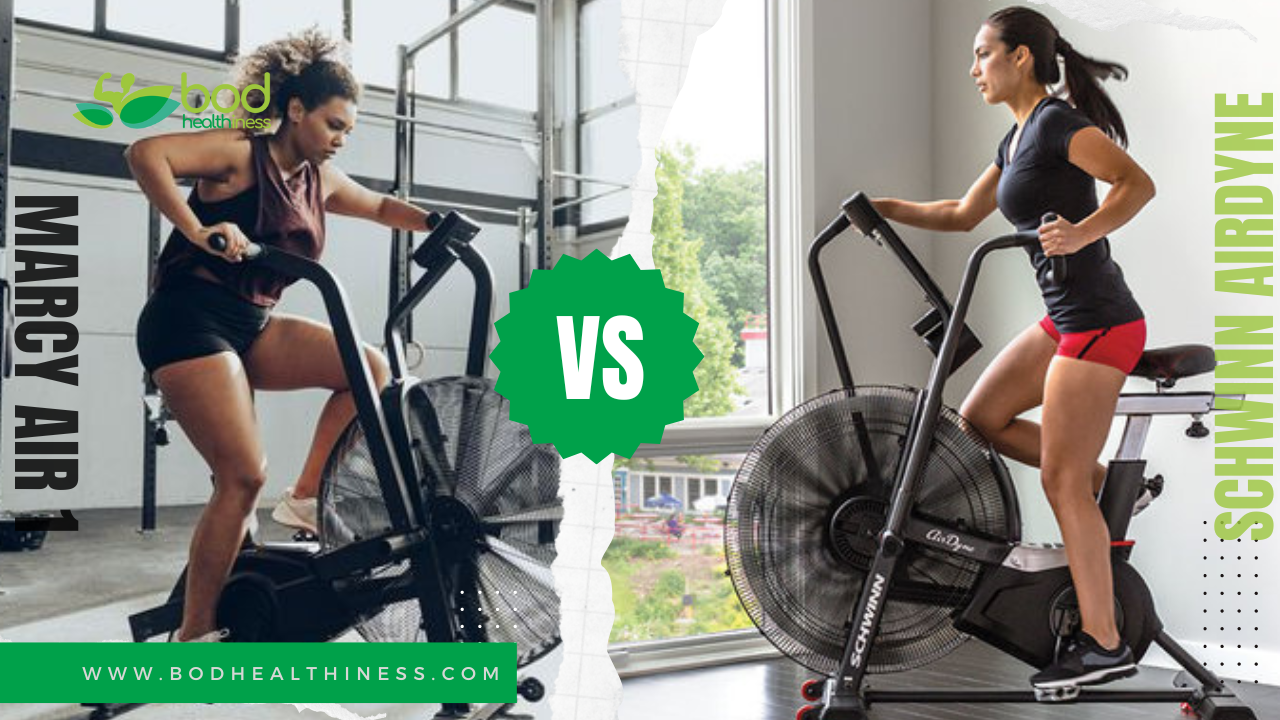 If you need a great bike to get your heart pumping, then you can choose either the Marcy Air 1 Fan Exercise bike or Schwinn Airdyne AD2.

However, since you can’t select both bikes, this article should help you decide which is better to buy. In this article, we compared the Marcy air 1 vs Schwinn Airdyne ad2 and identified all the key features you need to be aware of before you buy either bike.

In this section, we’ll review the key specs of these bikes and identify all the differences and similarities. Our key focus points to compare are the design, drive system & resistance, display, warranty, price, and finally, the pros and cons.

The Marcy Air 1 and Schwinn Airdyne bikes are both nearly identical in design overall. Still, some slight differences are noticeable at a glance. And depending on your preferences, they may affect your decisions when selecting the from both bikes.

With the Marcy Exercise Upright Fan Bike you get a mostly steel finish that gives this bike a more sturdy look and feel. While on the Schwinn Airdyne AD2 you get a lot of plastic components and coverings. Comparing them both, we’d say that the Airdyne AD2 bike has a more sleek and modern feel that makes it more visually appealing. But you still have to consider style against functionality and then decide which will be more relevant to you.

While the Schwinn bike is more visually appealing practicality still beats style in our books. So let’s take a look at how they compare in functionality.

The Schwinn AD2 Fan bike and the Marcy Air 1 both use wind-based fan resistance instead of a resistance based flywheel. They claim that the fans will help keep you cool, but in reality, neither bike truly keeps you cool. With the Schwinn AD2 stationary bike, the design uses plastic vents and a covering over the fan in a bid to direct the air onto the user. However, you won’t get much cooling from it.

The Marcy bike, on the other hand, doesn’t have any of the plastic coverings, and as a result, it doesn’t directly push the wind on the user. With this bike the air flows from the fans more horizontally and circulates air around you which slightly keeps you cool. So neither bike will be able to cool you down completely.

One of the essential components of any stationary bike is the comfort of the seat. Both bikes feature soft foam seats however the Marcy Air 1 seats are a little more comfortable than the Schwinn AD2’s. While Marcy has the better seat of the two, it still isn’t that great, so we recommend investing in a gel cushion for either bike.

The cushion we recommend is the Bikeroo Large Bike Seat Cushion or the Schwinn Cruiser Gel Seat Cover.

There are some slight differences between both bike pedals that are also worth mentioning. The first is that the Schwinn Airdyne we reviewed has pedals that are a little longer than the Marcy Air 1.

However, in terms of performance, the difference between them will be negligible. But we preferred the feel and straps of the pedals on the Marcy bike. For the arm pedals, we also think the Marcy Air 1 Fan bike feels better and has a better design.

With the Marcy fan bike, you get 2 bars next to the fan that acts as a footrest which allows you to pedal with your arms only by taking your feet off the foot pedals. In contrast, the Schwinn AD2’s footrest is attached to the arm pedals, and you will feel it moving below your feet while pedaling with your arms.

The last design feature we compared between the Schwinn airdyne vs Marcy air 1 is the LCD screen and functionalities. Design-wise we found the Schwinn’s console more visually appealing; however, it is a little smaller than the Marcy’s. The LCD on the Schwinn AD2 tracks your workout speed RPM, distance, calories burned, and time.In contrast, the Marcy Air 1 Fan bike does a little more and has a more prominent display with large bold information.

The console of the Marcy fan bike at idle also tells you your current room temperature. Plus it also tracks your workout time, current speed, distance, and calories.

Both bikes utilize a belt drive system that is near quiet and produces near infinite resistance through wind resistance.

When comparing the Schwinn airdyne vs Marcy air 1 to decide which is better to buy the price is one of the deciding factors. The Schwinn AD2 bike is the more expensive of the two bikes, but this might be as a result of a more appealing finish.

To get the price we got on the Schwinn AD2 Click Here. While Schwinn makes the better-looking bike of the two competitors, paying more for the same features is not something we can recommend. So since the Marcy costs less and is more sturdy, we chose it over the Schwinn AD2.

Another big differentiator of between the Marcy Air 1 and Schwinn Airdyne is the warranties that both products offer. We were disappointed with the warranty on the Marcy bike which is just for two years and only covers the frame of the bike.The Schwinn AD2, in contrast, features a more comprehensive warranty. They offer a 5-year frame warranty, 1-year mechanical parts, and electronics warranty, and lastly, 90 days both wear items and labor.

To give you a quick recap of the key points here are the pros and cons of both the Marcy air 1 and Schwinn airdyne ad2.

After comparing both the Marcy air 1 vs Schwinn airdyne ad2, we’ve decided that the Marcy is the better of the two. At the time of publishing this comparison it’s less expensive and feels more sturdy. Plus the bike is more functional when comparing all the key features of both bikes. The only downside is the limited warranty provided by Marcy. But if you need the best warranty that will cover your investment, then get the Schwinn.

With the warranty and features of Schwinn’s airdyne bike, we still think it is a great option and is worth considering if you want a more visually appealing fan bike. While it does cost a bit more, it will still get the job done. To sum it up… if you want great heart-pumping workout sessions, you won’t go wrong by purchasing either of these bikes. If you need more options, you check out our article on the best airdyne bikes to buy or our comparison of the top fan bikes the Assault Bike vs Schwinn Airdyne!