Is your muscle tone weak?

Are you thinking about staying fit at home?

Or maybe like most other folks, you do not have enough time to go to the gym, so you decided to buy either a spin bike or exercise bike. However, someone has advised against either since they do cost a bit and you don't know enough to make a choice.

In this article, we'll compare the spin bike vs exercise bike head-to-head and hopefully answer all you need to know by the end.

What is a spin bike?

In the simplest terms, a spin bike is a piece of fitness equipment that allows you to achieve high-intensity workouts at home. Spin bikes are one of the three types of exercise bikes. And will enable users to alternate the pace of pedaling to music with appropriate rhythm in an activity called Spinning. Spinning is an activity practiced in many gyms and is a fashion born in America several years ago and then spread all over the world. 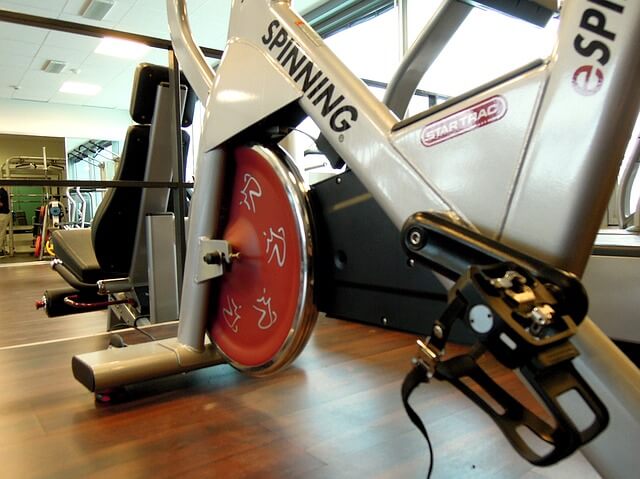 For example, while on a traditional exercise bike it is essential to maintain a correct posture as if you were sitting in a chair. However, while on a spin bike, you have to take different positions and actions, such as standing, swaying or moving along with a spin class instructor. As such the posture is more similar to ones that are taken by cyclists.

What are the structural differences between the spin bike and exercise bike?

Let's start with the difference between the structure of the traditional exercise bike and that of the spin bike. Usually, the spin bike has a more robust and heavy frame to suit its purpose of maintaining high-intensity workouts. Therefore, the spin bike is built to be more stable and suitable for prolonged and vigorous use. As a result, the size and height will be slightly more than an exercise bike.

The exercise bike, on the other hand, is often more compact and sometimes can be folded to preserve space. In contrast, spin bikes do not allow folding due to its structural design and requirements.

What are the structural similarities of the spin bike and exercise bike?

One similarity that most exercise bikes and spin bikes will have is the ability to adjust the seats. However, this adjustment will still differ slightly depending on the type of exercise bike. On recumbent bikes, you have more adjustment capabilities due to the design being similar to a chair. As such you will be able to move the seats back and forth to be close to the pedals or adjust the back of the seat in a reclined position. 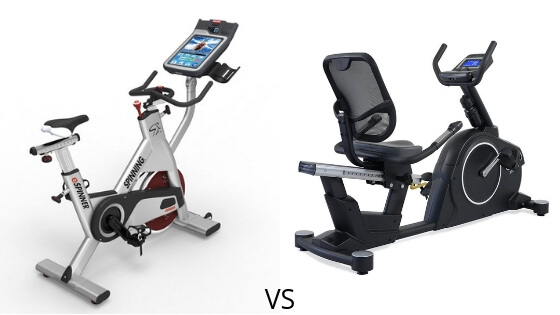 For upright bikes, you typically get the same type of adjustability as you do on spin bikes. This adjustability is because the seating position and seats are similar to a bicycle. As such you get to adjust their heights and make horizontal adjustments of the seat.

This feature of the spinning bike and upright bikes is essential to reduce or increase the distance between the saddle and handlebars. This adjustment feature allows not only for greater comfort but to be able to use the bike without causing pain or contractions.

In the case of very tall users or users of smaller stature, the saddle and handlebar adjustment are vital to the design of spin bikes.

What are the positional differences on the spin bike vs exercise bike?

Given the design of the two bikes, the position to be taken during training is very different.

When using the exercise bike, the correct posture requires a straight back, while in the use of the spin bike your back bent towards the knees, as when using road racing bikes.

For this reason, you can also pedal on the spin bike by lifting the buttocks from the saddle.

This difference in position leads to significant consequences as a spin bike puts more stress on the muscles of the back, buttocks, and arms. As such it is essential to choose a spin bike with good structural design. We recommend the Sunny Health and Fitness Pro Indoor Cycle as it has a good design and features that help reduce stress at the joints and muscle level.

With the spin bike, your arms and shoulders are also more involved in the exercise as you also use dumbbells while spinning. As a result, you will require more physical effort than is you would output while on the exercise bike. In fact, on the exercise bike, your back, the lumbar area, and the arms are stressed very little as workouts are more focused on the legs and thighs.

How do the Flywheel and Resistance differ between the exercise bike and spin bike?

The main difference between spin bikes vs exercise bikes is the weight and size of the flywheels that they use. On a stationary recumbent bike or upright bikes, you will typically find a flywheel between 4 and 12 kg, while on spin bikes you will find perimeter weight flywheels between 8 lbs and 50 lbs.

Both the spin bike and exercise bikes utilize magnetic, electromagnetic or mechanical resistance; however, having a heavier flywheel allows spin bikes to have greater stability while exercising.

The spin bike can also simulate slopes and descents more accurately and thus allowing it a more road like ride experience than recumbent or upright bikes. They are also explicitly designed to change the pace of pedaling very frequently, unlike your typical exercise bike.

Both the spin bike and exercise bike have similarities in their resistance levels adjustments. They both utilize different types of resistance and range between 8 levels of resistance up to 50 in the top-of-the-range bikes.

When should you choose an exercise bike?

The traditional exercise bike is the ideal choice for those who have a very sedentary lifestyle. We would typically recommend these bikes to persons who haven't come close to physical activity in a long time or want to increase their basic fitness.

While spin bike also allows some regulation in the pace of the exercise the costs are prohibitive when comparing them to exercise bikes. As such we also recommend an exercise bike for persons on a budget.

We also recommend the exercise bike to those with back problems. This recommendation is because exercise bikes involve the back only marginally. And in most cases, it is possible to choose an exercise bike with a backrest to have for more support.

When should you choose the spin bike?

The spin bike is the best choice for those who want high-intensity training, athletes and generally anyone looking to stay fit at home.

These bikes are also perfect for persons that want to sculpt their buttocks, reducing the abdominal fat or lose weight fast. Spin bikes allow persons to tone their body and lose weight more quickly due to their high-intensity workouts. Furthermore, a spin bike is also an excellent solution for cyclists who cannot train outdoors.

A word of caution:

Those who choose a spinning bike must pay attention to the duration and speed of their workouts until they reach a basic level of fitness. As spinning is such a fun fitness activity, it is easy to lose track of time and cause injuries while working out.

For that reason, spin bikes are mostly for persons who already have a minimum level of athletic experience. If you want a budget friendly spin bike we recommend the Sunny Health and Fitness Pro Bike. It has all the basic features you need and tonnes of positive reviews from customers.

Is it better to choose an exercise bike or a spin bike for physical activity?

The choice between exercise bikes vs spin bikes will depend mainly on your physical condition and fitness goals. The traditional exercise bike like the recumbent bike or upright bike is excellent for beginners and casual users. And especially for those who have not practiced any sport for years.

While the spin bike is for persons who want to lose weight, train their bodies with vigorous exercises or rehabilitate a physical injury. It is also for cyclists and athletes who need intensive physical activity to keep their performance high even in the off-season.

The decision is still up to you as you know your bodies condition better than we do. However, we can tell you that spin bikes are more fun to ride. And it is less likely that you will end up using your spin bike as a clothes rack in a few months if you buy one! We hope we answered all of your questions if not leave us a comment and we'll respond shortly.