NordicTrack S22i and Peloton Indoor bikes are the current top pick in the premium exercise bike section. Both bikes have far more to offer than what most users genuinely need and will give you a sweat-inducing workout at home! However, most persons will find it difficult to choose the right bike! As such, we've decided to pitch in with this unbiased comparison of the Peloton vs NordicTrack S22i.

The truth is, most reviews and comparisons of the NordicTrack vs Peloton have some form of bias. Or rather, they were made with information that is inaccurate. In this article, we'll clarify most of those mistaken notions and hopefully give you a better picture of how both bikes compare.

To kick things off let's start by doing a short review of both bikes.

If you are looking for a bike from either of these brands, you first need to identify precisely the things you'll need on an exercise bike. By identifying your needs, choosing between the NordicTrack s22i vs Peloton bikes will become much more straightforward.

Both companies essentially have two different strong points; hence identifying your needs makes it easier to choose a bike after knowing how they compare.

Peloton's strongest selling point is their app and the bountiful features, live classes, and elite trainers that they employ. The bike itself is also pretty amazing and stands out among the top 5 best exercise bikes to buy in 2020. However, the price is the biggest downfall of buying a Peloton bike.

NordicTrack's S22i bike's strong point is the bike itself and not so much the app. The app that comes with the NordicTrack is the iFit app, and while it does have a tonne of content, the user interface is less intuitive than Pelotons. However, that's not to say that the iFit app is utter garbage; on the contrary, the app in combination with the bike is surprisingly just as good.

We'll go into more detail later on in the comparison but first, let's take a look at the similarities of the Peloton and NordicTrack s22i bikes.

What are the similarities & differences of the NordicTrack S22i and Peloton Indoor Bike?

Both the Peloton and NordicTrack s22i bikes have many common features.

The first similarity is that both bikes come with a 22" HD Touchscreen display which you won't find on other bikes at present. The screens on both bikes are crisp and display app content flawlessly.

Moreover, the 22" display on both bikes can also be transmitted to a television using different means. Also, both bike screens also come equipped with speakers built into the screen. 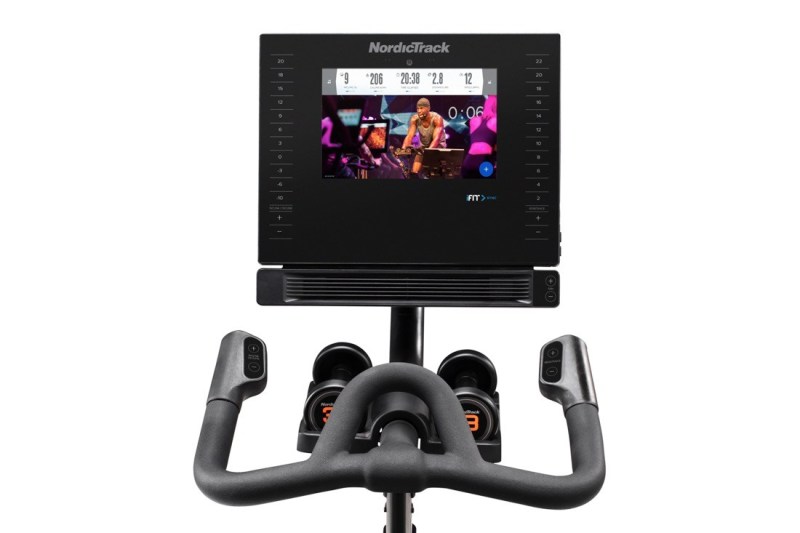 There are also a number of differences between the NordicTrack vs Peloton screens.

Firstly, the NordicTrack S22i has a screen that can swivel 360 degrees horizontally. The lack of the swivel feature is one of the points of the Peloton that gives Nordictrack the upper hand. NordicTrack S22i also features HDMI connections for sending video to a television.

Peloton, in contrast, has more screen connection options such as Bluetooth 4.0, ANT+ Wireless and Wifi built-in. The Peloton also can do screencasting to a SmartTV. So if you own a smart tv, you can send your workouts to a bigger screen and enjoy a more immersive experience. However, if you don't have one, then you'll need to purchase a Roku TV or Apple TV, etc. 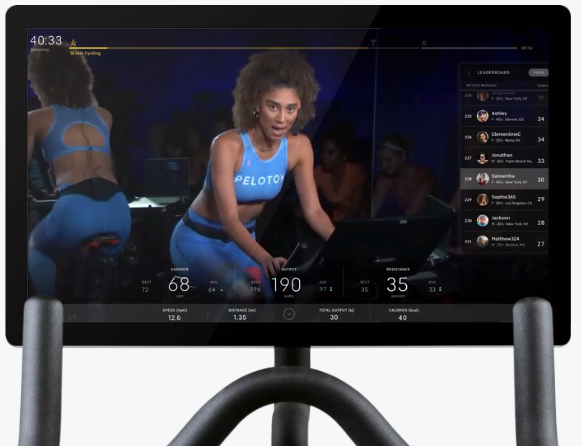 One last difference that is noticeable immediately with the NordicTrack bike is the inclusion of a built-in fan.

Another similarity of the Peloton and NordicTrack is the Drive System. They both utilize belt drive with Inertia-Enhanced Flywheels located at the front of the bike. Both bikes also use magnetic resistance to increase or decrease the difficulty of pedaling. Because of this similarity in the drive system, the ride experience between the Peloton vs NordicTrack is almost identical.

There are two main differences between the NordicTrack s22i vs Peloton's drive system.

Peloton's resistance levels are calculated using a combination of cadence, output, and resistance percentage. Their resistance is percentage based and ranges between 0 - 100.

In contrast, the NordicTrack S22i's resistance is easier to read and use. The NordicTrack has 24 levels of resistance that can be controlled by either you, your trainer or based on the terrain-matching system built in the bike. The automatic resistance control is a fantastic feature for when you want to focus entirely on your workout or experience a real-world ride simulation.

The last feature differentiator between the NordicTrack and Peloton is the incline and decline that the S22i bike is capable of doing. The NordicTrack S22i has a digital control that allows the bike to be inclined 20% and also automatically increase resistance. Additionally, the bike can also decline by 10% from a horizontal position.

Since both bikes are premium quality indoor exercise bikes, the materials they used in the constructions are nearly identical. Both bikes feature non-slip handlebars with multiple grip positions and a comfy seat. On both indoor bikes, the seat and handlebars can also be adjusted to suit your height.

Additionally, both bikes also have adjustable leveling feet and front-mounted rollers to make moving the bikes a breeze.

With both bikes, you will be expected to pay for a membership subscription to Peloton Digital app or iFit app.

The membership fee for the Peloton is to $19.99 per month in addition to the cost of the bike. On their website page, they still have a price of $39 per month, so it's not clear which price you will be paying. However, do note that the app cost is separate from the price of the bike, so that is an additional $468 for a year of use.

The iFit coach app comes as a part of the bikes package for the first year. After the first year, iFit will cost about the same as the Peloton app monthly.

Another significant difference that is noticeable when comparing the Peloton bike vs NordicTrack s22i is the price. The Nordictrack is cheaper than the Peloton by a few hundred dollars when considering the basic package of both bikes. However, there are occasional discounts available for you to take advantage of most times.

Click here to get the price we got on the NordicTrack S22i.

The length of a warranty says a lot about the sturdiness of an item and also how committed the brand behind it will be should a situation arise. So it is always better to pick the product with a more extended warranty.

NordicTrack is notorious for having terrible customer service. While Peloton, on the other hand, provides excellent service and quick support. However, we have to point out that most persons that had issues with customer service did not purchase the bike directly.

The last thing we'll take a look at is the pros and cons of both the Peloton bike vs NordicTrack S22i. 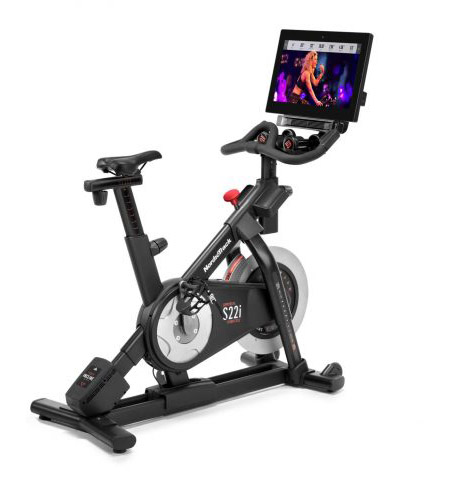 Pros of the NordicTrack S22i 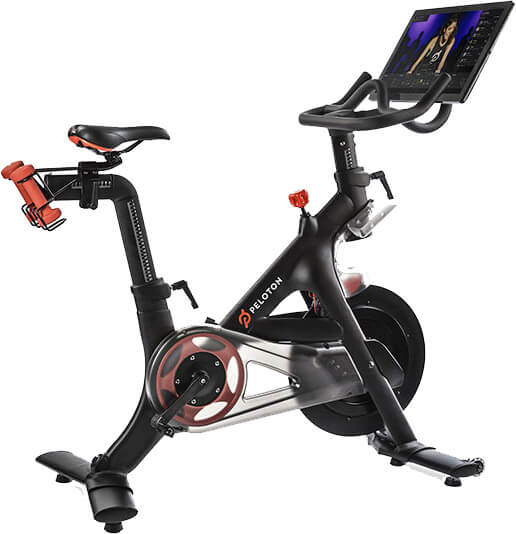 Both bikes have a tonne to offer the average user. However, the NordicTrack does the same thing as the Peloton as a stand-alone exercise bike. Plus it has a few more impressive features that the Peloton can't match at present.

The price of the NordicTrack is also lower than the Peloton with a longer more comprehensive warranty. You also get a Free year of iFit coach membership if you purchase the bike here. As such, we had to give the overall title to the NordicTrack bike.

However, the Peloton bike does have some strong points which NordicTrack probably will never be able to match. The first being the app and the amazing instructors that they have hosting live and on-demand classes. The app is also better laid out, and feature a lot more options that are not provided by the iFit coach app.

We conclude by saying that the NordicTrack is better after comparing after looking at all the main points. Nevertheless, if Peloton's live classes are more important to you, then buying a used Peloton bike isn't a bad choice. Otherwise go with the NordicTrack.

Hopefully, you now have enough information to pick the better bike after reading our comparison of the NordicTrack vs Peloton. Share your thoughts or concerns in the comments below!