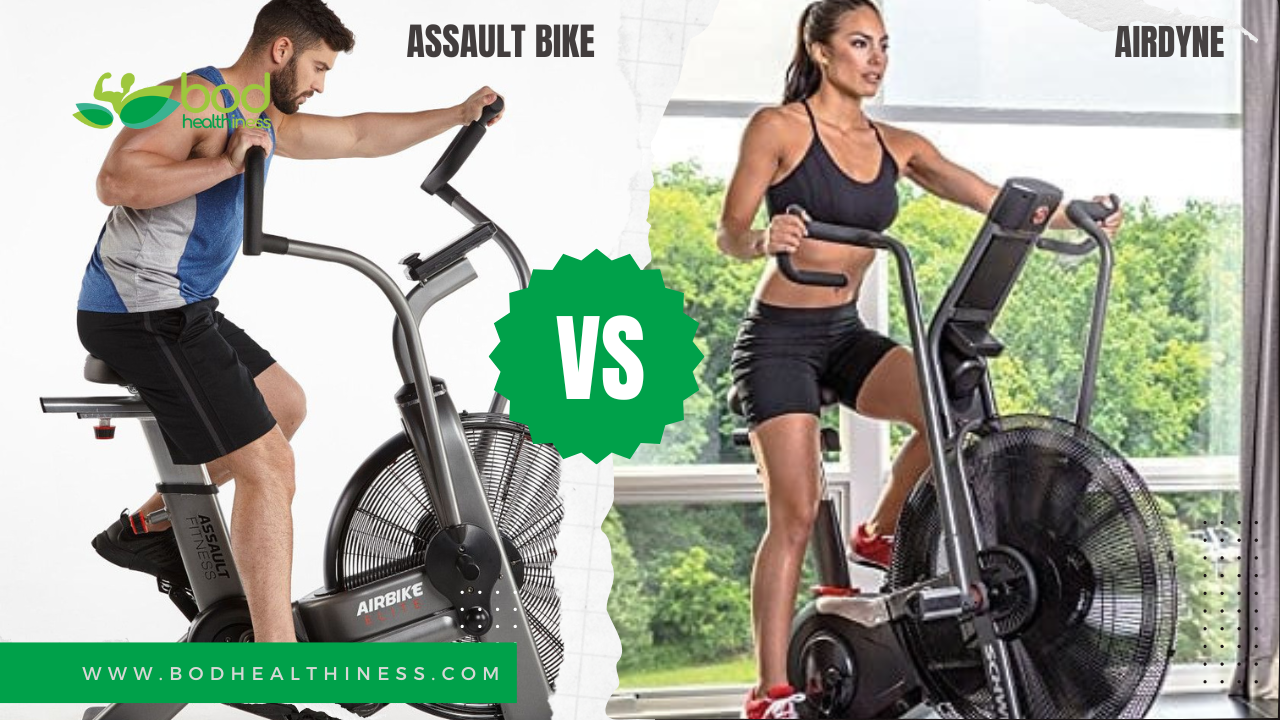 Air Bikes are all the rage these days!

Still with over 100 different models and more than 30 brands available, choosing the right air bike is never easy.

But I’ve got great news and better news to give you!

The great news is that both the Assault bike and Schwinn Airdyne bikes are among the top best air bikes to pick.

What’s even better news is that this article will give you a comprehensive comparison of the Assault bike vs Airdyne bike. So that by the end of this comparison of the Schwinn Airdyne vs Assault Airbike Classic you’ll know which bike is better to buy!

But before we start the comparison, we’ll do a brief review of the Schwinn AD6 Airdyne Exercise Bike and the Assault Air Bike Classic.

Both bikes are the top-selling air bike models and are thought of highly by other customers.

Over the past few years, Schwinn has built and sold at least four different Airdyne bike models. With each model being better than the previous version, they’ve finally managed to create an airdyne bike that we genuinely appreciate.

Unlike previous models of Schwinn’s Airdyne bikes, the Schwinn AD6 is one of the better of the lot. It features a heart rate telemetry system, a better drive system, a higher quality seat, and an overall better monitor. All these new and improved features make the Schwinn AD6 a great airbike to buy.

The Assault bike is one of the leading air bike models and the top pick for CrossFit. Assault air bikes were released a little later than the first Schwinn Airdynes but still are a strong competitor for even the top Schwinn Airdyne Pro model.

It features a sturdy 25-inch fan, full metal design, and a great LCD console that packs some great features that you’ll come to love. To date, Assault has only produced two models of their bike, but both are reliable air bike products!

Both bikes are the top-selling air bike models and are thought of highly by other customers. So purchasing either fan bike would not be an issue as they’ll both be a great calorie burner.

But since buying both bikes isn’t an option we’ll go over the differences between the airdyne vs assault bike. If you’re in a hurry, make sure you check out the comparison chart below as it sums up this comparison nicely.

The Assault Airbike and Schwinn AD6 both feature a similar design overall with only a few differences in some areas.

The Schwinn AD6 Airdyne bike is identical to the assault bike in that both features foam padded moving arms, comfy pedals, a large resistance fan, and rollers at the front of the bike for effortless movement of the machine.

With the Schwinn AD6 airdyne bike you get an overall stylish look with a metallic finish.

Although the bike looks great, it is noticeably smaller and features more plastic and thinner metal pieces than the Assault Airbike.

One cool feature on both bikes is the ability to use the handles separately from the pedals. However, we preferred the Assault Airbike handles over the Schwinn due to the design footrest.

With the Assault bike, the footrests are bolted on securely and do not move with the movements of the handles.

While on the Schwinn AD6 model, the footrests seem more like an afterthought. The footrests of the AD6 airbike features a slim half circular design positioned in such a way that you feel them moving beneath your feet while using the arm pedals.

Although the Schwinn bike has a lot of plastic coverings, we loved the fact that the bike comes equipped with a water bottle holder. In contrast, the water bottle holder does not come standard on the Assault Airbike but can be purchased and installed.

Both bikes also come equipped with a reasonably sized display console that features all the critical information of your workout. The Assault Airbike’s smart computer console allows you to monitor distance, time, calories, watts, speed, and RPMs.

It also features Tabata Intervals sessions that are great for building strength and upping your overall stamina. Plus, the bike also has a built-in heart rate monitoring program that uses telemetry to track your heart rate during your workout. With the Schwinn AD6 Airdyne Airbike, you get an LCD that tracks RPM, time, calories, watts, distance and your pulse.

The drive systems on the Schwinn Airdyne and Assault Airbike are both air resistance based. However, there are also some differences here that may be the deciding factor in which bike you end up purchasing.

The Schwinn AD6 Airdyne bike features plastic fans that are nearly quiet except for the sound of the wind. In contrast, the Assault Airbike is a great deal louder than the Schwinn Airdyne bike because it features a chain based drivetrain and metal fans. The fans on the Assault Air bike is larger than Schwinn’s and allows it to gain greater wind-resistance.

Most people prefer having a belt drive system over the chain drive found on the Assault Airbike as it makes less noise and requires no maintenance. However, for durability, the chain drive will last longer if used frequently.

One of the most critical features on both bikes are the seats. While both bikes feature padded seats, neither passed our comfort tests. However, we preferred the seat setup of the Assault bike over the Schwinn AD6 seat On the Assault bike you can adjust the seat both vertically and horizontally. While the Schwinn airdyne only allows horizontal adjustments for their seat.

In addition to better positional adjustments, the Assault Airbike also allows you to easily swap out the seats for custom seats that are more comfortable. On the other hand, the Schwinn bike seat isn’t as easy to replace.

However, with just a little more work, you can also swap out the seat of the Airdyne bike or purchase a gel seat cover for more comfort.

The price difference between the Assault Airbike and Schwinn Airdyne AD6 differs by about $100 give or take depending on their current promotions. Of the two bikes, the Schwinn AD6 is cheaper than the Assault airbike. If you want to see the latest price of the Schwinn AD6 Airdyne bike click here.

In contrast, the heavy-duty Assault Airbike costs a little more than the Schwinn bike but is more durable than the AD6 airbike. Schwinn also beats the assault fan bike in warranty by offering a frame warranty of 15 years, three years on parts, two years for electronics and a 6-month labor warranty.

What Are The Main Differences Between The Assault Bike Vs Airdyne?

The difference between the Assault bike vs airdyne is that the assault bike features a complete steel build while the Airdyne bike has more plastic parts. Assault Air Bikes also have better seat adjustments and a better LCD console.

Another difference is that the Airdyne AD6 airbike comes with a water bottle holder while the Assault bike does not.

After testing and comparing the Assault bike vs Airdyne AD6, we concluded that the Assault Air bike is the better of the two products. We loved the Assault Classic because it features a sturdier steel build. Plus it has better functionality overall with the seat adjustments and durability. The only downside of the Assault Bike Classic model is the noise that is generated by the chains. But if you don’t mind that, then we think this bike is a great pick.

On the other hand, if you would prefer a quiet experience, then the Schwinn AD6 would be the better solution.

While we prefer the Assault model in terms of durability, the Schwinn AD6 Airdyne bike is still a great option. It has a better warranty plus comes with a water bottle holder. It also costs less than the Assault fan bike, so it’s still a decent option. Schwinn has since released a new Airdyne Pro model that is superior to the Assault Airbike Classic. To find out more about that bike, click here.

Of the two bikes, most other reviews and user feedback recommends the Assault Airbike more than the Schwinn AD6. Most persons prefer the durability and the seat adjustments found on the Assault Bike. The Assault bike also has more positive feedback about the products overall quality online.